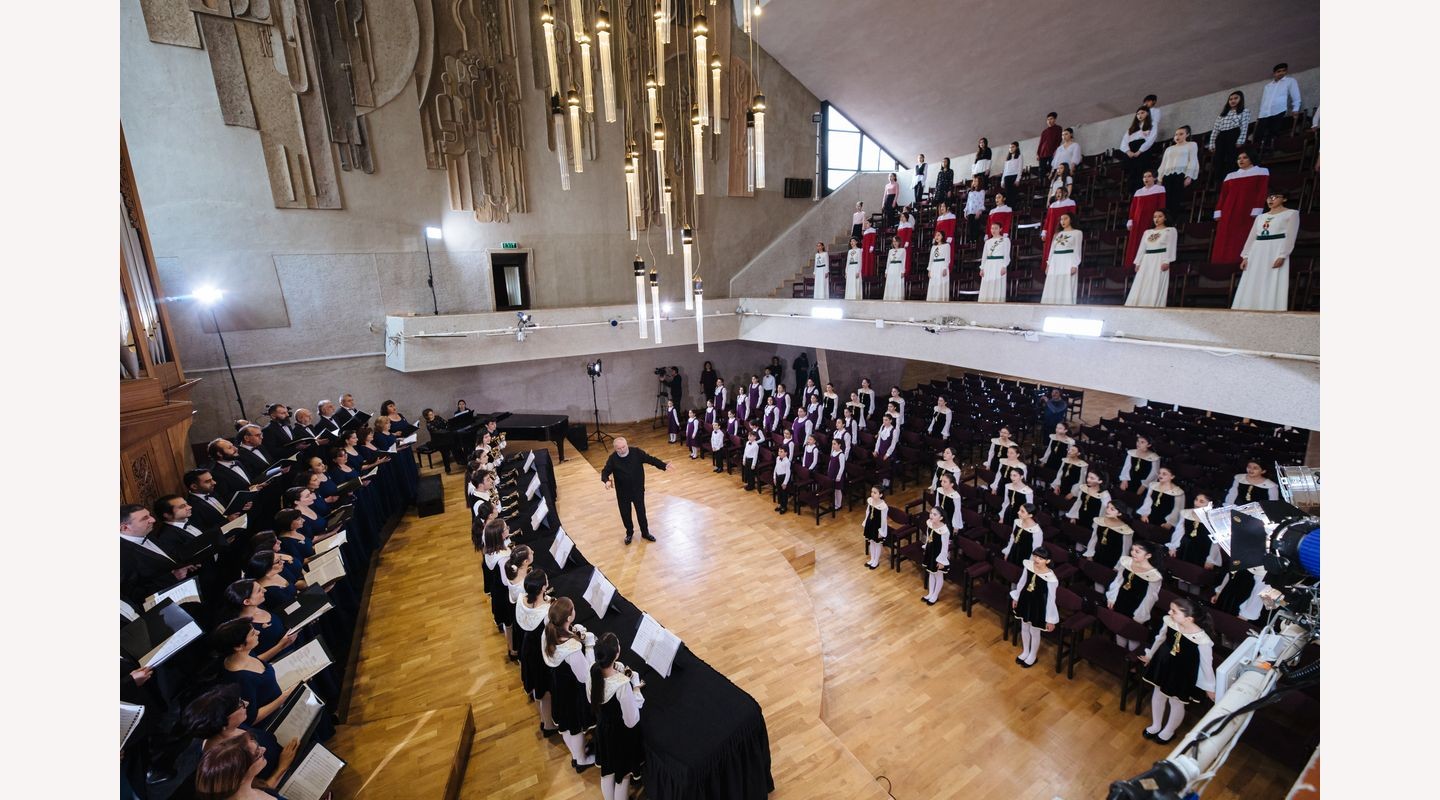 On December 19, six choirs from Armenia and Artsakh joined seven other choirs to perform on World Choral Day (http://worldchoralday.org/). This event, organized every December under the auspices of the International Federation of Choral Music, attracts thousands of singers who organize concerts around the middle of the month. This year, the thirtieth anniversary of the initiative, the concerts took place under special circumstances created by the Corona pandemic. In the events involving Armenia, most Armenian choirs appeared live, while the others, from Berd (Armenia), Germany, Lithuania, Moldova, Switzerland, Israel and the United States, participated online. The concert was broadcast live on the Internet. The Little Singers of Armenia, under the direction of conductor Tigran Hekekyan, hosted the event in Yerevan. In greeting the live and virtual participants, Niery Grace Bardakjian said that Armenia “as always, adds its voice” to the annual gathering; “we join to sing for peace.” As stated in the Little Singers of Armenia’s announcement, the Armenian choirs were dedicating their participation this year to “the heroes of the Artsakh war.” Bardakjian described the ravages of the war that had come to an end just weeks earlier. The “deliberate destruction of churches and monuments,” she said, “has made clear that Azerbaijan’s intention was not just to conquer Nagorno Karabakh but to eliminate all traces of Armenian identity and culture.” The fact that the same authorities had destroyed thousands of khachkars in the ancient cemetery of Julfa in 2005, such that there is no trace of them in Nakhichevan today, indicates that “the Azerbaijani authorities will not preserve the Armenian cultural heritage of the land currently under their control.” The current humanitarian and cultural catastrophe, she went on, “reminds us of the darkest period of our history,” the 1915 genocide perpetrated by the Ottoman Turks, that eliminated 1.5 million of the indigenous Armenian population. She denounced the attempt to repeat the same today and appealed to UNESCO “to raise its voice in the name of the people of Nagorno Karabakh,” to protect their human rights, preserve their rich cultural heritage and protect their right to life. She concluded, “Let us sing for peace and brotherhood.” The program began appropriately with all participating choirs singing Stepan Lusikyan’s Armenia. This theme predominated not only in the pieces performed but also in the visual presentation: after each musical offering, the viewing audiences could join a virtual tour through Armenia. Cartologist Rouben Galichyan introduced Armenia through historical maps, giving a brief
account of the fate of Nagorno Karabakh (Artsakh). From there, the voice of a young man visiting the country described the sites shown, mostly in spectacular aerial views. Thus, after the Arar Choir, conducted by Gor Melkumyan, sang Yervand Yerkanyan’s Hope of Armenia, and the Coro Calicantius from Switzerland performed Eriks Esenvals’s Stars, the virtual audience visited the Matenadaran and learned about restoration of ancient manuscripts. When the National Chamber Choir of Armenia, an adult chorus conducted by Robert Mlkeyan, presented Lusnak sari takin by Komitas and David Haladjian’s Gloria, there followed a film segment showing underground caves from the 4th millennium B.C., where Armenian wines were stored in clay jugs. Another piece by Komitas, A Beautiful, Clear Night, was chosen by the Agape Choir, under conductor Mariya Galstyan, followed by the Rapsodia Choir from Moldova, which sang Constantin Shvedoff’s God Is Our Saviour, directed by Natalia Barabanshikova. And from Lithuania the Ugnele Children’s Choir, under conductor Valerija Skapiene, presented two of Victor Johnson’s Three Songs about the Elements. As a protective measure against virus infection, members of this choir donned plexiglass face shields — and still managed to give a remarkable performance. The virtual tour through Armenia continued, with breathtaking aerial views of mountainous regions, landscapes dotted with ancient churches and monasteries, a stop at the pre-Christian Garni temple, and a historical review of traditional khachkar stone crosses. The largest number of groups came from Armenia, among them the Tavush Diocese Children’s Choir, which sang A Million Dreams by Ben Pasek and Justin Paul. The conductor was Kristine Sheroyan. A highpoint came with the appearance of the Children of Artsakh Choir, with conductor Luiza Grigoryan. They sang Edgar Gyanjumyan’s We Long to Live, in English. The song addresses the plight of the people of Artsakh; its lyrics are a straightforward declaration of the right to life and to peace. “We have to thrive, to live and fight for life,” they sang, “Against the war, we call to fight for peace and love.” Demanding that wars be stopped and weapons be banned, the song ends in a prayer, for freedom “in our independent land, in our wonderful land; May good prevail on the planet.” The Little Singers of Armenia were well represented throughout, and not only vocally. The LSA Handbell Choir, directed by Donavon Gray, performed Linda Lamb’s Celtic Farewell. Maestro Tigran Hekekyan conducted the LSA choir in Let There Be Peace, by Jill Jack Miller and Sy Miller. To conclude the concert, Hekekyan brought all the choirs together to present ErebuniYerevan, by Edgar Hovhanisyan and Paruyr Sevak. Here the Shogher Choir from Germany joined in, as well as the Western USA Hamazkayin Nayirian Choir.